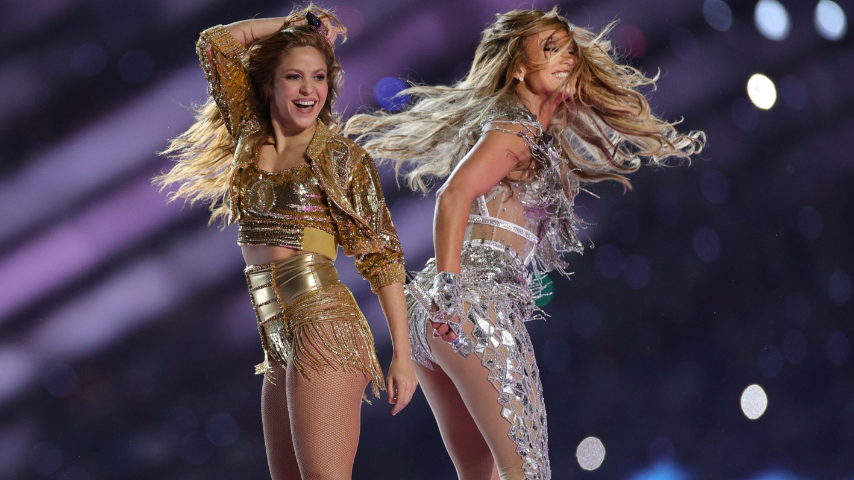 The superstar duo made history at Super Bowl LIV on Sunday as the first two Latina women to co-headline the coveted Pepsi halftime show gig, which they successfully brought each of their own unique styles to in just 12 minutes.

In one of the most energetic and purely entertaining halftime shows in recent memory, Jennifer Lopez and Shakira absolutely brought the house down with a nearly 15-minute Super Bowl performance. Seemingly designed specifically for fans of glitter and butts (so, everyone), the halftime show saw the pair perform the biggest hits of their respective careers before they took the stage together for the grand finale.

She may not have netted an Oscar nomination, but Lopez isn’t letting all that Hustlers training go to waste, busting out an athletic pole dancing routine in the middle of the set. Lopez’s daughter also took the stage and performed (other guests included Bad Bunny and J Balvin), while Shakira reminded folks why she’s one of the best in the biz’ with her famed (and very honest) hips and an immediately viral bit of tongue-wagging at the camera.

“Let’s show the world what two little Latin girls can do,” Lopez said on Instagram before the show and, indeed, the pair put on a passionately multicultural performance that celebrated their roots, including a heck of a statement performance when Lopez donned a reversible US/Peurto Rican flag jacket while performing “Born in the USA”.

The star was soon joined by J. Balvin, who hit the stage with Lopez as the two danced to a remix of “Love Don’t Cost a Thing.”

Lopez continued to flaunt her moves to “Mi Gente” before moving on to a high-energy version of “On the Floor,” which she had been teasing for weeks on TikTok with her #JLoSuperBowlChallenge asking fans to recreate the number’s dance routine and share a video of the result on the popular app.